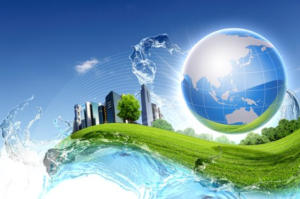 Hydro-power energy, is electricity generated using the energy of moving water.  Rain or melted snow create streams and rivers that eventually run to the ocean.  The energy of that moving water can be substantial, and it can be harnessed to create electricity.

Water energy has been harnessed for centuries. Farmers since the ancient Greeks have used water wheels to grind wheat into flour. Placed in a river, a water wheel picks up flowing water in buckets located around the wheel. The kinetic energy of the flowing river turns the wheel and is converted into mechanical energy that runs the mill.

A typical hydro energy plant is a system with three parts: an electric plant where the electricity is produced; a dam that can be opened or closed to control water flow; and a reservoir where water can be stored. The water behind the dam flows through intakes and pushes against blades in a turbine, causing them to turn. The turbine then spins a generator to produce electricity. The amount of electricity generated depends on how far the water drops and the volume of water moving through the system. The electricity can be transported over long-distance electric lines to homes, factories, and businesses.

Hydropower is currently the cheapest way to generate electricity.  Once a dam has been built and the equipment installed, the energy source—flowing water—is free. It is a clean fuel source that is renewed yearly by snow and rainfall.